In about a year’s time, small business news and information site BizSugar.com has gone from a small social bookmarking site with about 2,500 members to a growing small business social media colossus with an estimated 51,000 members and a rapid growth curve that thrills owner Anita Campbell. 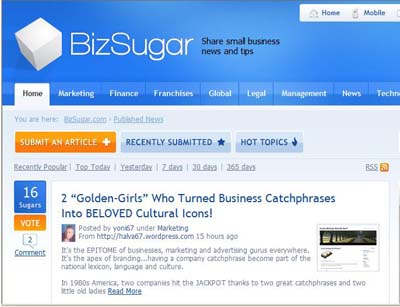 In a recent interview with Brad Nellis, executive director of the Northeast Ohio Software Association, which in May awarded BizSugar it’s Best of Tech Award for Best Social Networking App, Campbell talks about what BizSugar is, where it’s going and the implications for small business in the social media revolution.

(Here are some highlights.)

“Well, it’s a Website where you can promote your blog posts and articles and other information that’s of interest to the small business community and small business owners can also go to that site and find out interesting helpful information that they need to help run their businesses. So basically you can just bookmark and share content on the site with others and you can connect with other people through the site. That’s where the social part comes in.”

“You can put something out there right away but we do have a team of moderators actually from around the globe who come in and if they see something that is off topic or is spam or whatever, they will discard that.”

“Well, we make it easy for people to share content not only on BizSugar, their content, but also share content from the BizSugar site so you’ll notice that we have some of the social sharing buttons. The one that gets the most use is the Retweet button and when you Retweet you’re not really driving people back to BizSugar so much. You’re driving them to the original article but that’s valuable because it will say “Retweet at BizSugar, which helps our brand, but the site owner knows, whose article was submitted to BizSugar, knows that they’ll be able to get some traffic by having those Retweets go back to their original article.

The key to success

“So it’s just a question of how do you want to demonstrate value to people who use the site and we choose to demonstrate value by letting them you know actually drive traffic off the site, but by doing that…it sounds counterintuitive…but, by doing so, it increases the value that they see in what they do with us. Instead of trying to be a completely closed and self-contained community, we actively promote trying to share, not only on BizSugar, but all the other social sites. We have a StumbleUpon button. We’ve got Facebook sharing buttons. You know, you can share by e-mail. Whatever you want to do. But it all increases that visibility you get from participating in BizSugar.”

Your business and social media

“I think social is probably even more important than Search Engine Optimization at this point. It’s how word spreads about businesses online and the whole online world is becoming more and more important. I think the companies that get it know that, you know, this isn’t about direct response. You shouldn’t think about this in the sense of like direct mail or direct response in a marketing sense…It doesn’t equate that directly. You know, it’s much more about making your business be known, staying top of mind with your customers, developing a sense of loyalty with your customers. Giving them what they want in the way that they want it. So if they want information and to be able to interact with you on Facebook or on Twitter or on LinkedIn or where ever that you’re there for them when they want to interact that way, because if you aren’t there for them and that’s how they want to interact, they’re going to find your competitor and do it.”

Listen to the rest of the interview with Anita Campbell on social media and small business and join us today at BizSugar.com.