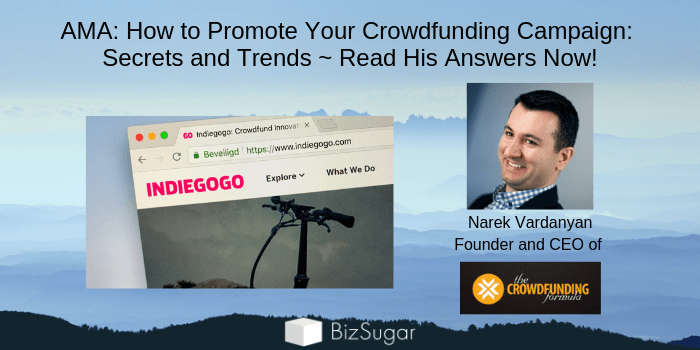 Read all the tips from Narek Vardanyan, Founder and CEO of The Crowdfunding Formula on how to promote your crowdfunding campaigns.

UPDATE: Narek has agreed to periodically drop by and answer any follow-up questions members may have.

Instead of borrowing from a bank, today many businesses can be launched by their future customers. Find out all about crowdfunding in Crowdfunding: What is It, When Can Small Businesses Use It – and When Doesn’t it Make Sense.

Many people think they can just create a crowdfunding campaign and it will magically finance their business. It is important to understand that they require a lot of advance planning, marketing and PR for success.

Each crowdfunding platform gives you a very short window of opportunity before newer campaigns push you out of visibility. If you don’t get a lot of interaction, and especially donations, right after your campaign goes live, it is unlikely to succeed.

60% of all crowdfunders fail to achieve their goals

So what are the 40% doing right that the vast majority aren’t? The Crowdfunding Formula interviewed 200 successful campaigners. Wouldn’t you like to know what they discovered?

Read that link for some inside tips, and be with us for the AMA (Ask Me Anything) by going inside the BizSugar Mastermind for even more! Start adding your questions in the event post now.

What is an IndieGoGo “In-Demand” Campaign?

Did you know that IndieGoGo allows fundraisers to continue raising funds AFTER their campaign is over? According to their platform:

You have successfully reached your crowdfunding goal — now what? With Indiegogo InDemand, you can continue to raise funds and build your backer community after your campaign ends.

Questions are closed now, but you can see the exceptional answers. How?

10 thoughts on “AMA: How to Promote Your Crowdfunding Campaign: Secrets and Trends”