Sometimes it’s easy to forget, but a little over a year ago, Kelvin Cech was stuck grinding out copy for a small sports academy in Edmonton, Alberta. 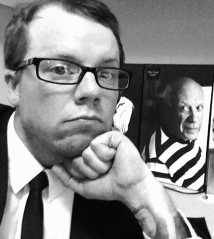 “I was churning out far too many useless words every day, a fact I was frustrated with, but a fact of my current position nonetheless,” Cech recalls.

Until the day Cech decided to chuck it all, quit his job, move to the “big city” of Vancouver and start a business of his own.

With the help of a mentor, Cech started his business doing work for a single Edmonton-based design studio.

“It was slim-pickin’s in those days, that’s for sure – there were some pretty rudimentary blog posts and writing practices going on in the ol’ Function office…” Cech remembers.

But he also remembers it being worth it!

Fast forward to today, Cech says he has transformed his writing talent into a thriving business capable of producing enough income to sustain him in Vancouver’s pricey rental market. It’s an achievement he remains proud of.

“Function is booming,” Cech declares. “There are days when I wish it would go away because I feel like I’m pulled in too many different directions.”

He admits, however, that on those days, he often has to stop himself and remember back to the tough beginnings of his business. It’s remembering those early struggles that puts things into perspective.

He also knows his success is the result not only of his own efforts but of the connections and the relationships he has built.

“And to be honest, I owe a lot of my current growth to BizSugar,” Cech adds. “I’ve used other blog submission sites, and while none of them send the good ol’ Function blog the sort of traffic that Bizsugar does, that’s not the rewarding part.”

Instead, he says, it’s the community that keeps him coming back again and again.

“I use Bizsugar because I like to write,” he adds. “And I hit the roof when other people relate to or appreciate what I write.”

Would you like to become a Contributor of the Week and have your business or website featured just like Kelvin Cech’s here on the BizSugar blog?

The BizSugar community is a great place to share helpful content and to network for your small business. Join us today.