Ross Kimbarovsky could tell you about his passion for entrepreneurship. He could (and does) talk often about the drive to create better value for his clients and customers. 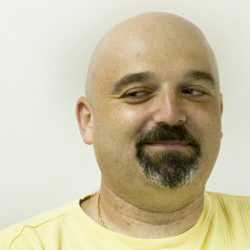 But another reason Kimbarovsky teamed up with co-founder Mike Samson in 2007 to launch crowdSPRING, a platform connecting entrepreneurs with freelance designers and writers, had to do with the dress code.

“We discovered that entrepreneurs, businesses and agencies were paying a lot of money for logo design, web design and other design services but were often left unsatisfied and underserved,” Kimbarovsky explains. “We also realized that too many business owners simply could not afford to pay for good quality professional design services.”

But he also admits: “…I became tired wearing suits to work (for 13 years before crowdSPRING, I was a trial attorney) – I wanted to wear shorts and sandals every day.”

In only six short years, Kimbarovsky says the company has grown dramatically.

“Nearly 140,000 designers and writers from 185+ countries work on crowdSPRING,” Kimbarovsky says. He adds that the company has served tens of thousands of entrepreneurs, small businesses, agencies and non-profits in over 100 countries seeking freelancers for their projects.

And he says customers aren’t limited to small businesses.The company has also worked with some of the world’s best known brands, including Amazon, Starbucks, Barilla, Microsoft, LG, ConAgra, and Forbes.

The crowdSPRING approach is a basic crowdsourcing model. Instead of hiring a specific designer or inviting bids from multiple designing firms, crowdSPRING users simply post a project with budget, requirements and time frame.

Perspective designers and other freelancers then submit designs and other content fitting the requirements from which buyers can choose.

Kimbarovsky says the site now averages about 130 submissions per project meaning a good potential selection for buyers. The site also provides a solution that allows small businesses and entrepreneurs to obtain quality designs for hundreds instead of tens of thousands of dollars, he says.

The company has also created resources to inform freelancers who use the site.

“For example, we released a free e-book, Contracts for Designers Who Hate Contracts, to help freelancers protect their intellectual property,” he says.

But Kimbarovsky says he also gets lots of mileage out of social media including being a regular member at BizSugar.com.

“There’s so much outstanding content contributed to BizSugar,” Kimbarovsky says. “I often find interesting and unique content on BizSugar that I don’t find elsewhere, and it doesn’t take a lot of effort to find useful posts.”

“The voting system makes it easy for me to quickly find the most useful content across a number of relevant subjects, including Marketing, Finance, Technology, Management and Startups,” he adds. “I also share posts from the crowdSPRING Blog where we frequently write about important issues that concern small businesses and startups, and from my own blog at rosskimbarovsky.com, where I frequently write about technology, marketing, entrepreneurship, and social media.”

If you would like to benefit from the BizSugar community and perhaps even be featured as a Contributor of the Week like Kimbarovsky, it’s simple to get started. Just create a free account, like our Facebook page and start sharing small business content and voting for and commenting on the content provided by our members. We look forward to hearing from you.