Recently we introduced BizSugar readers to a new feature here on the blog – it’s where we talking to small business owners (and even some big brands) to learn about how they’re using social media to build their business and ask them to share some tips, insight and like experiences. So far we’ve spoken to Adam Wallace to hear how Roger Smith became known as “the social media hotel” and how Petco is using social media to connect pet lovers and increase sales. Next up? Mari Luangrath from Foiled Cupcakes. 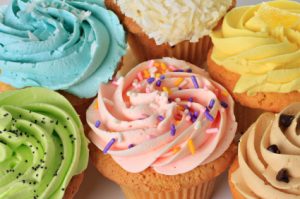 If you’re not familiar with Foiled Cupcakes, you should be. Foiled Cupcakes is a Chicago-based company that has used social media to grow a company all about delivering gourmet cupcakes. So far they’ve scoured press coverage from Entrepreneur.com, ChicagoBusiness,com and many others. Even better, they’ve used social media to radically grow their sales. How have they done it? Well, that’s what I wanted to find out.

1. Hi Mari, thanks for taking the time to chat with me. I’ve read that you somewhat fell into Twitter. You found out your Web site wouldn’t be ready for six weeks and turned to Twitter as a new way to meet people, knowing nothing about how to use it. I imagine a lot of SMB owners experience that same initial fear. How did you get over that fear involved with social media and finally jump in?

It helped that a few friends (@adriandayton @ginidietrich @xanderdenke) helped me get started. I was like the new kid at school, and these guys connected me with their Twitter friends. After I was comfortable on the Twitter turf, they let me go and make my own friends.

2. One of the loudest cries we often hear from SMBs is that social media doesn’t breed sales. What percentage of your sales come via social media? How have you tracked them?

90%+ have come from social media. We have a pretty intense follow-up system (phone calls to confirm and reconfirm deliveries, as well as follow-up phone calls, letters, and e-mails) so by the time a customer has gone through the process, we have had seven opportunities to figure out how they’ve heard about us. No, it’s not the most tech-efficient way to do things, but we’re okay with that – at least, for now.

3. Outside of sales, in what other ways, if any, has social media helped you to grow your business?

All the press we’ve gotten has come through our connections on Twitter, Facebook or LinkedIn. All of the speaking opportunities I’ve had have come through those channels as well. It’s the power of an infinite network, and I’ve found that if you are respectful, fun, and excited to connect with people, the opportunities really never end. Six degrees of separation? Please. It’s more like 2 or 3 now that we have this rich network on the web. 🙂

4. The @FoiledCupcakes Twitter account has more than 6,500 followers on Twitter. Obviously it’s quality, not quantity that counts, but how have you been able to so successfully and consistently grow your following?

One thing I’ll never do is try to artificially grow our Twitter follower base. Something that has worked really well in terms of growing our base, though, is just talking individually to people. I’ll take an afternoon once every few weeks or so, and just start talking to people who have recently followed us. Not just a spam, “Hey, thanks for following,” but I’ll take the time to read their bio and most recent tweets, check out their site, and then reply with personal questions about who they are and what they do. One of our more recent followers, @TheAwkwardType, recently tweeted that Sephora accidentally sent an eyeliner instead of her beloved moisturizer. I tweeted back that I felt her pain and “OMG – how terrible!” We became fast friends, and now tweet back and forth regularly. It’s stuff like this that makes my job fun and keeps things not-so-serious. After all, we’re only selling cupcakes. It’s not like we’re solving the world’s problems. You know?

As a location in social media, you’ve been able to do some pretty neat things, including finding meetups in your area via LinkedIn and offering to donate cupcakes. How effective has that type of promotion been in terms of sales and/or brand awareness?

Very effective. It works because professionals and those with decision-making power in the corporate space are a very important target market of ours. That’s an area that we decided we wanted to get into early on. I thought to myself, “What’s the easiest way to find these people?” And LinkedIn seemed like the right place to start.

How has social media impacted the way that you do business and connect with your customers?

We actually only know this way of business, since we grew Foiled Cupcakes from day 1 using only social media.

If you could give SMB owners just three tips on how to grow their brands using social media, what would they be?

Thanks so much, Mari, for sharing Foiled Cupcakes’ story

[The last Wednesday of each month BizSugar features interviews with businesses using social media in cool and exciting ways. Know a business you want to see featured? Drop us an email at bizsugardotcom [at] gmail [dot] com and let us know!]