After studying for a PhD in Medical Physics in the UK, Jane Sheeba was set by most people’s standards. She returned to her native India and took a job at the Centre for Nonlinear Dynamics at Bharathidasan University. 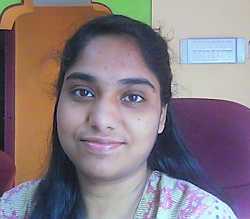 It was the kind of job that most aspire to: secure, prestigious, lucrative.

As Sheeba explains on her personal blog:

In India, we have this crazy belief – once a person completes his/her studies and graduates, he/she should “settle” in life by going to a permanent job – a job that guarantees that the person won’t be fired for silly reasons, for poor performance etc. and that also provides pension after the person retires from the job until his death.

But all the while something was nagging at Sheeba. While studying in the UK, she had discovered blogging as a way to connect while far away from home.

It was an interest that persisted when she returned home and began her regular day job and wouldn’t go away despite the social pressures to “settle” into her new career.

At the same time, Sheeba craved flexibility and the ability to go her own way and accomplish her own goals. She found that urge restricted by her regular job which was all about working on someone else’s time table.

Many Blogs, One Mission

Ignoring the advice sometimes given to new bloggers, Sheeba maintains many blogs in different niches. These include ProBlogging Success, Tech Buzz Online, Merry Relationships and more.

Her theory is that she can more easily develop multiple “authority” blogs, as she calls them. These are blogs in which she develops a specific voice and expertise on a particular topic.

If and when she notices one or more of these blogs are performing poorly she can simply discard them, like failing product lines, and move one to something else.

She says she did meet skepticism from friends and relatives about her goal of developing her blogs into businesses, but got plenty of support from her husband.

Earlier this year, she quit her full-time job and began managing her blogs full-time. She has also hired one assistant, a family member, to help with the more menial tasks of her business.

She estimates she works 6 to 7 hours per day but not consecutively. The time affords her greater flexibility in her schedule, including the opportunity to care for a three-year-old child she has at home.

She has no immediate plans to sell any of her blog businesses but says this too could change over time.

Sheeba estimates she spends as much time promoting her blog properties as she does creating engaging content. Some of that promotion includes social media activities on sites like BizSugar.

“I’m a fan of networking and getting to know new people,” Sheeba says in an email. “And BizSugar helps me with that. BizSugar is one of the earliest communities I joined and I’m still continuing to use it because of the quality and variety of information I can get on the site. I get to know a lot of people and have created genuine contacts – to be honest I came to know about 50% of my current contacts in blogging communities like BizSugar.”

You’ll also want to vote and comment on the content submitted by others and to join our BizSugar Facebook community as well. Be sure to check out our submission guidelines to be sure your content fits with what our community is about. We hope to meet you soon!